When it came to providing a proven range of fire protection solutions for a revitalised building in London highlighted by a sweeping and technically ambitious curved façade, SIDERISE was able to meet the challenge with its CW-FS curtain wall fire stop system. 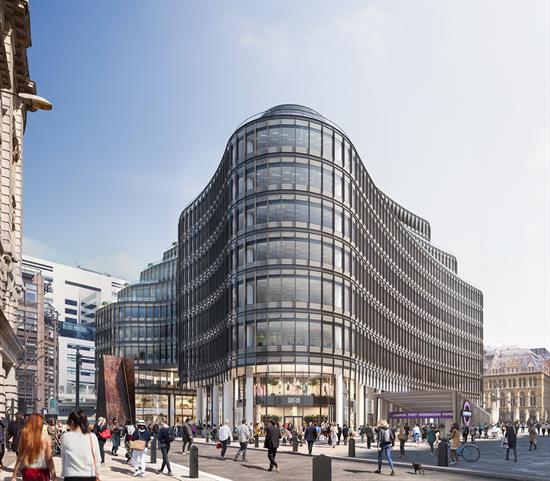 Designed by Hopkins Architects for developer British Land, 100 Liverpool Street is a 520,000 sq ft mixed-use building and the newest major project in the ever-popular 32-acre Broadgate area of the city. Partly built above Liverpool Street station and adjacent to the new Crossrail station, the project - which saw an outdated building demolished and then rebuilt using the existing structural steel frame - is a major feat of engineering, due to both the design and the constrained site.  With the new curved façade presenting a number of compartmentation challenges, façade contractor Focchi worked with SIDERISE who provided the certified CW-FS Fire Stop system for the unitised curtain walling.

Due to the curved nature of the façade and inner structure, the firestop system at the perimeter slab edge was required to follow the curve and maintain a consistent minimum 10% compression fit, to accommodate the design life movements of the façade structure.  This is where the SIDERISE CW-FS came into its own due to the unique Lamella orientation of the stone wool fibres which make up the company’s curtain wall range of perimeter fire barriers. The CW-FS system was able to follow the curves without compromising the movement capability of the firestop system, or the simplicity of installation.

Façade contractor Focchi installed the SIDERISE CW-FS120 perimeter barrier and fire stop system to seal the void between the floor slab and the external facade and provide vertical compartmentation at every floor level.  The product offers a unique combination of effective on-site performance and easy installation, supported by SIDERISE’s extensive technical support.

The product has been designed to maintain fire resistance by sealing the void between the floor slabs and the external curtain wall both horizontally and vertically. It is a one-piece product with a pre-compressed non-combustible stone wool core. Furthermore, the system features integral aluminium foil facings to provide an overall Class A1 rating, as well as excellent resistance to smoke. It also offers tested fire rating options ranging from 30 minutes to three hours and will suit void widths up to 600mm.

Involved in projects throughout the world and having manufactured acoustic and fire insulation products for more than 45 years, SIDERISE offers a large range of tried and tested product enhancements specifically developed for the façade industry.

Back to Projects Next ›